It was nearly seven o’clock when I arrived to Portixol on my bike, dressed in formal suit and high heeled sandals. The others were on the dock already, finishing the theoretical explanations, simulating an emergency operation. Nacho, the instructor, was on the dock, on board of a canoe and with another kajak on his lap.

- Do not change your clothes yet – he told me – listen to this carefully: the stern of the canoe you rescue has to be opposite your bow.

He pulled the canoe on his lap to one side, drawing a pair of scissors. One of our colleagues, Nanda, sat on the stern of the rescued canoe, jumping up to the tub. We all did the same, one after the other.

We set sail quickly, late in the evening. Actually, they all could have sailed much earlier, but they had been extending the theory lesseon, killing time, waiting for me to come from work, so as to give me the opportunity of following the last lesson of the course. Nobody said anything about it, but it was obvious. It was a lovely detail from their part.

We were in such a rush to set out that I took the canoe of a colleague by mistake. From outside, they seemed to be the same, but each had been adjusted to a different height.

- We have to exchange them when we leave the port.

We paddled with the bow to the waves. Once outside the port, half of us jumped into the sea, without tipping the canoe, and the other half rescued the ones who were in the water. Then, we switched roles. Next, there was a sort of survival operation and we had to leave the kajak alone for a moment beside the rocks. And the last straw was to have to rescue our instructor, who got into his canoe directly over the tub, climbing over the bow of my kajak.

- You have such a frightened expression! – He said, laughing out loud.

We paddled to the port together, while it got dark. We picked up the canoes, paddles and life jackets and placed them in the store. We exchanged phone numbers and future plans for the next course, on Saturdays and Sundays in Portixol and Santa Ponsa.

And we went back home, on bike, with our clothes and backpacks completely wet. 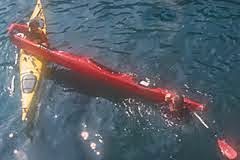